It probably isn’t much of a secret that I love writing kick-ass female characters. Some of my past badass ladies include not only main characters such as the Level 1 source Kaede, Sergeant-to-rescuer Yaliana, and war heroes Ira and Dounia, but also side characters such as sharp-shooting Stella and snarky Bei Bei. I love writing women who can hold their own in whatever arena they choose in life, from combat to magic to academia.

However, my bad-ass ladies, while bad-ass, are not perfect.

For those of you have read my works, you know that Kaede is a bit standoffish, Yaliana is impulsive, and Dounia holds a grudge. They make mistakes in their respective stories that can lead to unfortunate consequences. The main thing about my girls is that they learn from their mistakes. They try and fix their mistakes. Things don’t always go as planned, but they don’t give up.

I try to make my female characters as realistic as I can in the world they inhabit, and that means that they are dynamic and while they have flaws, they aren’t going to stay that way. Or, in the very least, they learn to either control or manage their weaknesses.

I guess my problem with so many so-called “strong” female characters is that they are physically strong but otherwise static. One good example of this problem is Lara Croft. Don’t get me wrong – I love Lara Croft. I’ve been playing Tomb Raider since it first came out in the 90s. But the original Lara Croft could fight and was smart, but she didn’t really change over time. She was just “perfect” without having flaws.

Hey everyone, long time no see!

I’m just writing in to tell you about the #LGBTWIP tag going on via Twitter this month. A lot of LGBTQ authors are responding to this tweet to talk about their latest WIP. I guess I’m band-wagoning onto the idea, because here I am.

So one of my WIP is about agender plant-aliens who are meeting humans in order to do a trade deal. The story goes that they are trying to make a trade, with a secondary goal of making an alliance, but then a radical xenophobic group gets involved and tries to mess up the tentative agreement. My MC is a scientist who does a lot of her own experiments on herself. She is a biotech engineer who is working on making their species more hardy in order to survive longer, healthier lives. Because of her work, she is added to a diplomatic team that includes her “mother,” the main diplomat and negotiator.

The premise came from a very famous Tumblr post about how aliens might see humans as the scariest ones in the universe and not the other way around. My plant-aliens are very peaceful people who worship nature and the balance of life. Meeting war-like and aggressive humans is a bit of a culture-shock for them.

Anyway, a lot of the plot is yet undecided, and there’s a lot of work to be done on it.

If any of you are wondering about my Across Borders rewrite, I haven’t exactly worked on it in a while, mostly because of grad school.

I’m also working on a free read on Wattpad called Text Me. Feel free to check that one out, since it’s free. Notice I’m using the word “free” a lot? Yeah, it’s free. It’s not finished yet, but I’ve been updating it fairly regularly.

Anyway, hopefully I will finish my thesis fairly soonish and I will be able to write again.

I keep saying that, but “soon” is a relative term.

Anyway, drop into the comments if you have anything to chat about!

So I’m updating my blog even though I have accomplished pretty much nothing writing-wise. I’ve finished two chapters of my thesis for my English MA, but I haven’t finished editing Yaliana even though it’s been since August that I was supposed to have finished them.

I have a new Tumblr blog? I just created it after sadly deleting my fandom blog. If you want to go follow me on Tumblr, you can find me at alex-powell-author.

I’m working on trying to finish the Yaliana edits today and tomorrow. Sorry to my Less Than Three Press people who are working on edits and wanted them back ages ago. I hope I can finish them soon.

As for my depression, it’s had its ups and downs. I was basically useless the entire summer because of fatigue, but hopefully I can finish some projects.

I hope everyone is getting their own projects done! Good luck!

Hello all! I’ve been MIA for a bit, and I want to explain a bit.

I’ve been having a hard time with chronic exhaustion, which as of yet does not have an explained cause. I’ve been to the doctor, had numerous blood tests and even undergone a test for sleep apnea. The doctor is still trying to diagnose me with something so that we can treat my tiredness. Just so you all have an idea of how this is affecting me, I haven’t been able to concentrate or focus on anything for any length of time. I’ve been missing work, haven’t been able to do any of my Masters coursework and haven’t done any writing or editing since late July. It’s been very stressful and frustrating for me. I’ve been slowly trying to do some work again, and I hope by September I’ll at least have a doctor’s diagnosis for my problem.

Now that that’s out of the way, on to more happy news.

So, a little while ago I put out a call on Twitter for artists to do an art exchange with me – my writing in exchange for art. To my surprise, someone actually answered me!

Reiko Meyer was interested in doing an art exchange with me, and nothing could make me happier, because I’m actually terrible at art. There’s nothing I want more than to have amazing fanart of my characters, but my artwork is laughable. So, in the hopes of finally having fanart, I made a call, and Reiko answered.

Ta-da! This is Yaliana. Reiko did an amazing job. I love it an incredible amount, and I hope to do many more art exchanges with her in the future!

This is also a call for any other artists out there who would like to do an art exchange. I’m a writer who is willing to write from pretty much any prompt in exchange for artwork.

If that’s something you are interested in, email me at aa.powell.author@gmail.com

And lastly, I have the final cover art for Yaliana! I’m really excited about it as well, because as usual, LT3 Press has outdone themselves with their cover art. 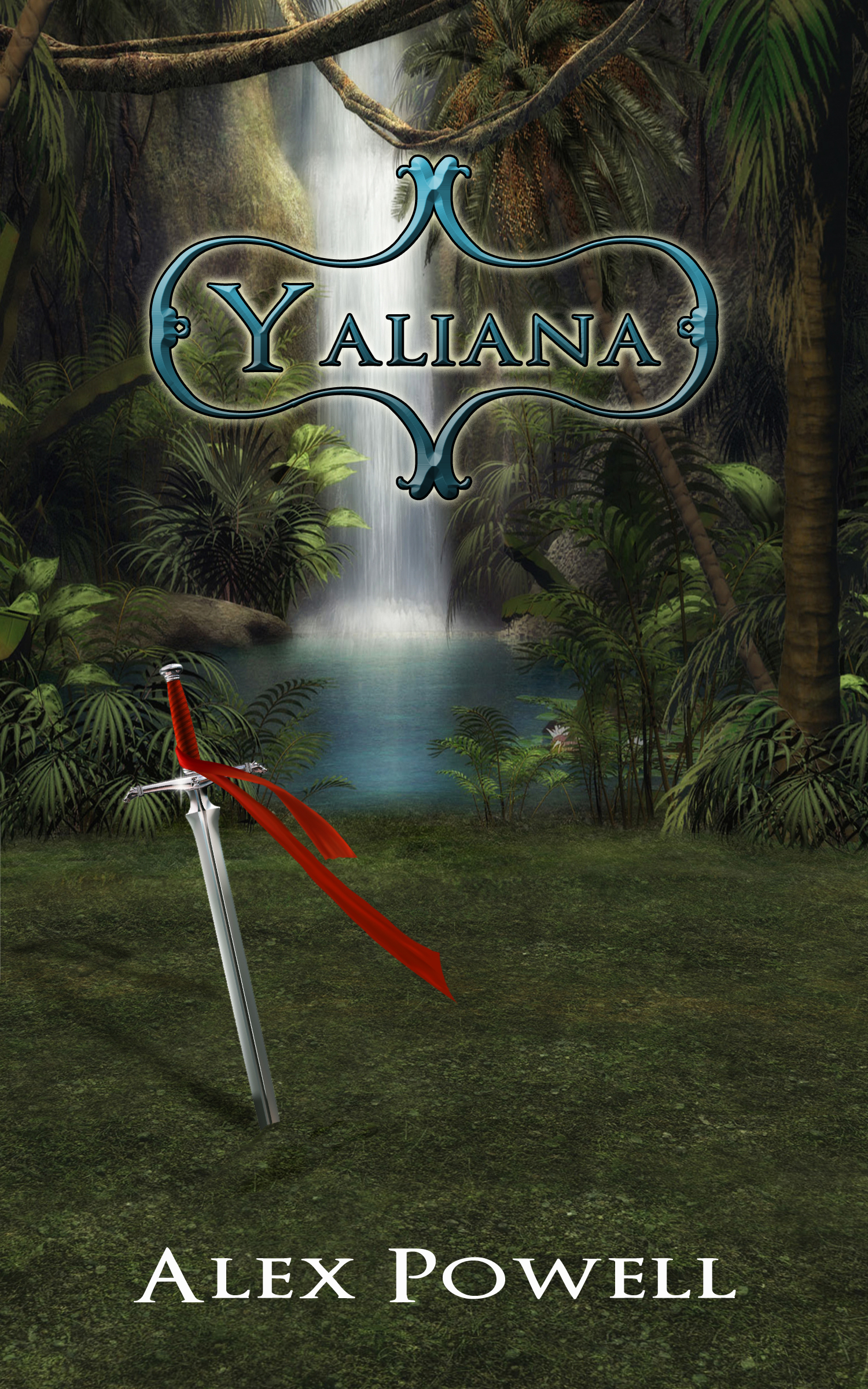 So I’m still doing my best to get the editing for Yaliana finished so that we can get a release date for it. I’m getting it done slowly, but it’s been difficult, as outlined by my tiredness issues above.

I hope that next time I talk to you, I’ll be able to tell you that I’m back on track!

But on to other things.

I have several projects that I’m working on!

First, I submitted one of my short stories, 15 000 words, to Less Than Three Press for their anthology call Hearts of Steel. I wrote about knights on an alien planet trying to save someone from the death jungle that covers the entire planet. It was fun to write, less fun to edit, and nerve-wracking to submit. I haven’t yet received a response, but I have to wait a few weeks to hear back from them.

I wrote another short for a charity anthology that I was invited to be part of. I’m not sure how secret it is, so I’ll stay hushed about it for now. But it’s 7 000 words long, just a teensy one, so it was finished quite quickly.

I have a few different stories on the go right now. I foolishly started an enemy-to-lover story in which the main characters are forced to marry against their will. I think it will be fun to write, but I’ve only got about 8 000 words in. I’ll tell you all how that one goes.

I’m also working on doing research for a greenpunk story set in an alternate Victorian London in which green technology became important rather than industry. That’s just the backdrop though, the real story is about a trans woman detective who is trying to catch a serial killer who is murdering prostitutes. This one is a lot more developed than the other one, mostly because I spend a lot of time thinking about it. Murder mysteries are hard to plot out though. This is a hard one to write on, because it’s so complex.

I’m working on the sequel to my ace aro dragon story still. It’s also slow going because I seem to have hit a wall, which is probably why I’m working on the other two more than this one. The first book is great, it’s all contained, it sets up everything, but now I’m floundering in the middle. I hope I’ll be able to fix it soon.

That’s it for now, I’m deeply mired in numerous projects as well as grad school. Hopefully I’ll get some time to write in between assignments.

Anyone working on anything interesting right now? Feel free to comment!

So you finished NaNoWriMo and have a 50 000 word novel on your hands. Now what?

I won NaNoWriMo this year, and now I have a novel, the same as so many other NaNo winners. Some people need to actually finish their novels, because although they won NaNoWriMo, their novel is going to be longer than 50 000 words long. Good luck to you. Don’t slack off on your writing just yet.

As for the rest of us, now we have to get beta readers and start revising. I’ve got at least two beta readers who are running through my novel to find pacing problems, plot holes, characterization issues, and anything else that doesn’t make sense and needs to be fixed.

So, do you have a beta reader? I did a post on beta readers a while ago. But to sum it up, a beta reader is looking for loose ends in your draft and letting you know so that you can tie them up. Sometimes that means adding or deleting scenes, changing things around, or throwing your computer out the window. Try not to do that last one, because as frustrating as revisions can be, they are still necessary.

I already have tons of revisions in mind, because my draft was very bare-bones. All I was doing was trying to get those words down. Sometimes I got writer’s block, but I still had to forge ahead to get to the next milestone. This is the problem with a lot of NaNoWriMo drafts, because you’re plugging away and need to just spew the words on the page.

Well now is when you fix the problems you created during the writing process. At least you don’t have such a huge deadline for revisions. I would suggest, however, creating your own personal deadlines in order to make sure you actually finish it.

Revisions are hard, and sometimes you have to be hard on your draft. Like I said in my beta reader post, make sure you choose readers who aren’t afraid to hurt your feelings by pointing out problems.

I’m doing that right now, so fellow writers, we’re all in this together. Hang in there.