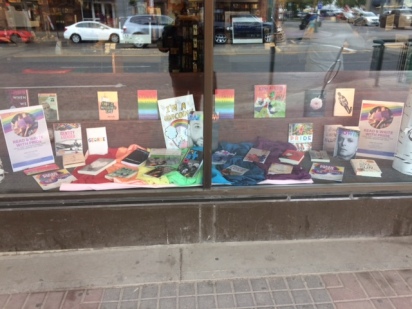 I’m super excited to tell you about the reading event Read & Write with Pride that took place at Audrey’s Books last night.

We had five readers: Ruby Swanson, Heidi Belleau, Marina Reid Hale, Rob Browatzke, and myself. We were hosted by Sheldon L’henaff, who did a great job of keeping us all on track.

When I first arrived, I was nervous that a) I would say something really dumb (which happens at times) and b) that no one would show up.

I was nervous for absolutely no reason, because not only did lots of people show up, but for the first time, I managed to do an intro to my reading which made complete sense, and I didn’t forget anything. This is a good thing. 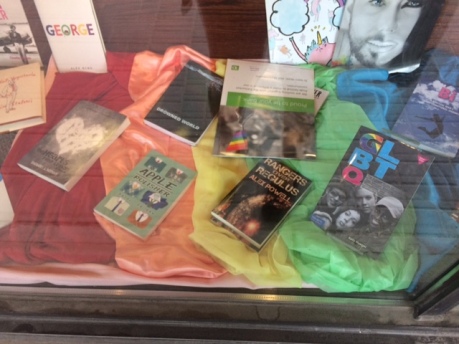 So, I read fourth, and I read from my yet-to-be-released story with the place title “Yaliana” but which will soon have a proper title. I asked earlier on Twitter whether I should do an action scene or a sappy scene, but found, to my dismay, that most of the scenes I could choose from were all action scenes. I tried to include some light banter before all hell broke loose, so I hope I succeeded.

Ruby Swanson read first, opening up out little gathering. She read from her book A Family Outing which is about her and her son, who comes out to her as gay. It was a very poignant piece, and I think that a lot of people were touched by the scene where she and her son sit in her office at the U of A and talk.

Heidi Belleau read next, and she read a section from her novel that she co-wrote with Sam Schooler, Dead Ringer. She read a rather intense scene between the two main characters Percy and Brandon, who are discussing Brandon’s grandfather James Ringer and his sexuality.

Then Marina Reid Hale opened with a bang, reading from one of her slam poems about female bodies and male entitlement. She performed several more poems from her book of poems titled These are NOT Love Poems.

Lastly, Rob Browatzke read from Wonderland. The section that he read from is a flashback from his childhood and younger years about all the times that he has been bullied for being gay. It was also a rather intense reading. He also read a short section on his own experiences, which was a deeply personal piece to read to us.

All in all, we all had a good time meeting and greeting people afterwards as well as doing the actual readings. I had a lot of fun, and I will hopefully be back next year for more of the same.