I have a release date for All the King’s Men! It’s July 27th, which I think is a great time for a book to be released, during the height of summer. I’m obviously really excited to have something to look forward to in the future.

My cover art for ATKM is coming next month, so I can share that with everyone soon. I’m always really happy with cover art from Less Than Three Press. LT3 has some pretty amazing artists.

In other news, I’m still slowly working on some other projects while also getting the hang of the bookstore business. If you hadn’t already heard, I now own a bookstore, and I have a new kitten who will be my bookstore kitty. He’s already gotten in a lot of trouble knocking over stacks of books and climbing to

the top of racks. (I’m also shamelessly going to include many kitten pictures in this post.)

I have one mini project in the works, which is the anthology for Gay Romance Northwest. Their call for this anthology is called Magic and Mayhem which is a charity anthology to help GRNW with their various programming and book donations. The call is for either stories with a pairing of mage/cyborg or soldier/tattoo artist. For those of you who’ve attended the conference in the past, this is from the fun Character Type Love Match game that readers played during the last two years.

I’m going with mage/cyborg, mostly because I’m a fantasy and sci-fi writer generally. I’m just about 8000 words into it, and it probably won’t be more than 10k words long. That’s due March 31st, so I will be working on that until the end of the month.

My tentatively titled “Far Patrol” ace aro dragon novel is still out on beta. I expect that to take a little while because the novel is almost 60k words long. It’s a pretty hefty one for me, my longest novel to date. The sequel to that is on the back burner while I work on the Magic and Mayhem story. 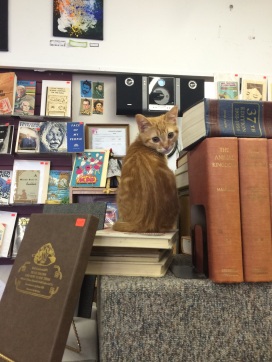 As usual, I have plot bunnies running amok, and there’s all sorts of story ideas going every which way. But I’m glad to be back to churning out the writing.