I’ve been talking about my cyberpunk story for a while now. To be honest, this one was started for NaNoWriMo 2013 and has been mostly finished for the better part of a year. The needed revisions weren’t too bad as far as revisions go – I’ve seen people scrap half of an already written novel, so adding in a few scenes here and there wasn’t a big deal.

So, yes, it’s finally here. I’ve finished the revisions and it’s currently being read by two beta readers and edited by me. Very soon I will be submitting it for publication with Less Than Three Press. I’m very proud of it, and now that it’s finally almost finished, I think I can let everyone know! It’s currently about 58K words, but it will probably lose about 1-2000 words in editing.

A few of you might be wondering – what exactly is cyberpunk?

Cyberpunk is a genre meant to take place in a high-tech world with low-life living. With the advance of our current technology, many writers suddenly saw all types of different places technology could go in the future. 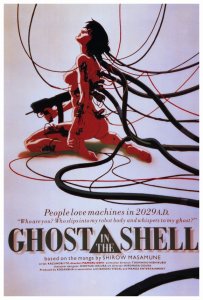 A cyberpunk setting is one that can take place mostly in cyberspace, and is generally a dystopian setting. A really good example of cyberpunk is the Matrix trilogy. With cyberpunk, the sky’s the limit when it comes to setting – or rather, not the actual sky. The power of the human mind is phenomenal, and cyberpunk often explores this idea.

My main character for this one is a hacker who is being hunted down by an unknown government for reasons not quite made clear. It was a fun one to write, and I hope I see more cyberpunk novels coming out in LGBT publishing.

A few other cyberpunk examples:

Ghost in the Shell (anime)

If you’re a science fiction fan like I am, and you haven’t yet gotten into cyberpunk, I would really recommend it as a genre, especially if you also like dystopian novels.